Philadelphia in less than 3 days 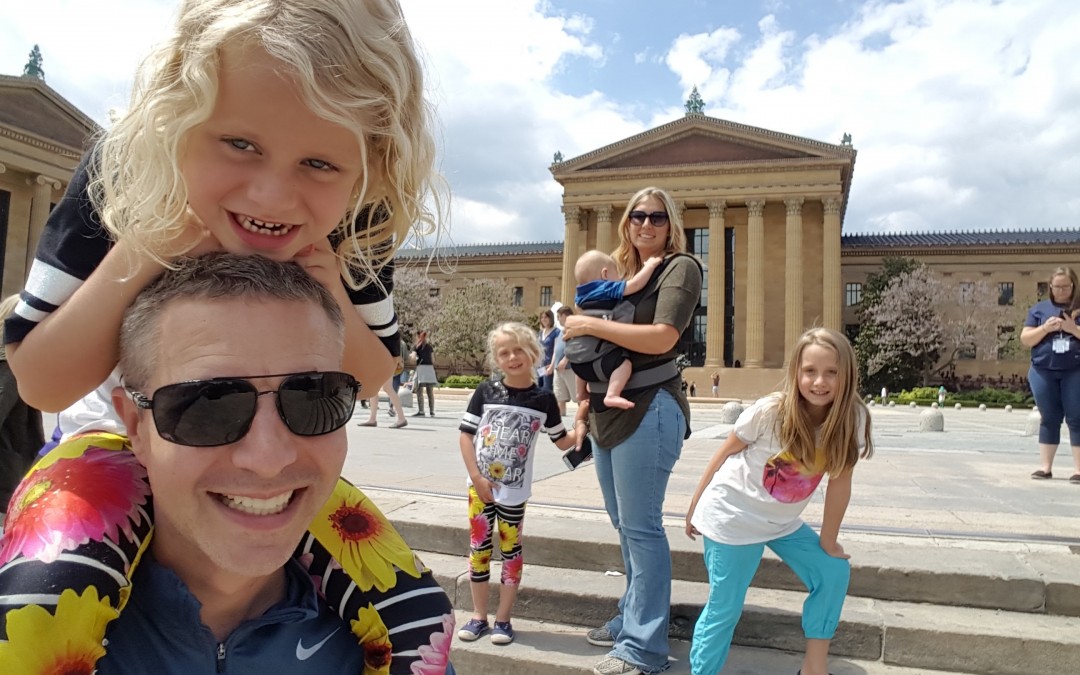 This last May, we had the opportunity to travel to Philadelphia.  Philadelphia was an amazing city and trying to do as much as we could in just a couple days was a challenge.  Especially because we were in town as part of a Gobundance event (my men’s entrepreneur group).  There were scheduled activities for parts of each day, so we had to run even harder to see it all.

Downtown Philly: Park Underground!!  As soon as we got off the plane, we went downtown to the Liberty Bell and Independence Hall area to get our bearings and try to get a bite to eat.  Parking was crazy as we searched for a spot on the side of the road.  We didn’t realize there was an underground parking garage right by the Liberty Bell.  When in Philly, park underground.  The parking meters didn’t work and we got two tickets in the first hour.  We walked around a bit to adjust from a bit of jet lag and discovered a Chinese Festival was going on downtown.  Fun surprise.  We ended up finding lunch inside a food court/mall area next to Liberty Bell center.  The food was poor standard mall food, not the food we had heard about in Philly, but we were dying of hunger from traveling and decided to just feed our starving kids and enjoy good food later. 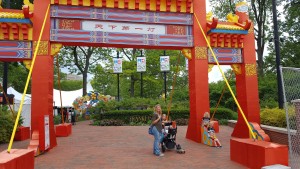 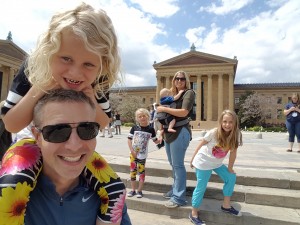 Rocky Steps: We were running out of time and needed to get to our event in West Chester, but first, we knew we had time to run up the Rocky Steps on the way.  This was a ton of fun and we have since turned our kids into huge Rocky fans.  Especially Isabel, who loves all things Rocky, except when Apollo dies.. She loves Apollo.  We parked across the street which was easier than downtown, but cost $10 cash.  We got hustled a bit by the Rocky impersonator at the Rocky statue…  He jumped in our picture, then asked for a tip.. Well played Rocky, Well played.

We arrived in West Chester that evening for friends and fellowship.  Our friend Brotha James was rocking the music for the adults and kiddos, and it was great catching up with friends and meeting new ones.  West Chester is a cute little town and we wish we would have had more time to just walk around.  The downtown area was great and there was lots of greenery on the roadside. 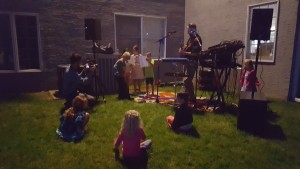 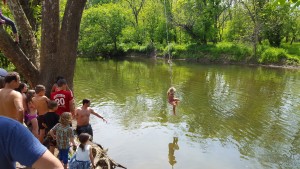 Friday was dedicated to our Gobundance event, but we did get a chance to jump into a creek and swim around.  The kids had a blast on the rope swing.  That night we had more Brotha James songs and fellowship.  Had a great lunch at the Landmark Americana in downtown West Chester.  Unique Philadelphia style eats.. Kids an adults were happy.

Saturday was really our one day to see it all in Philadelphia.  We started at the Liberty Bell after parking in the underground garage this time. That was much better planning.  The Liberty Bell was great. The only bummer was there were a ton of tourists from other countries, and unfortunately, the culture is a little different when it comes to lines.. Even when it was our turn, my kids were getting pushed and pulled out of the way.  You can see some of that concern in Charlotte’s face as Mama Bear was fighting off the tourists! 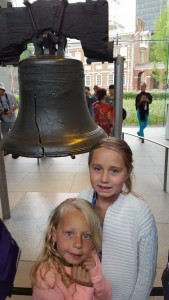 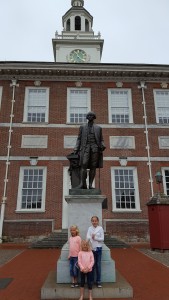 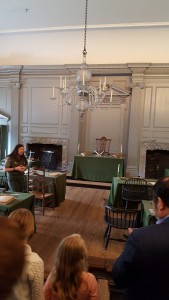 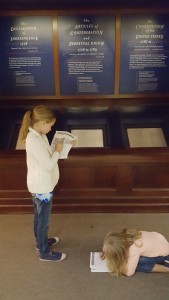 Next we did the tour of Independence Hall.  This was a great learning experience for us and our kids.  Kaleena and I were emotional all day as we learned more and more about our country and became more and more proud.  Maddie loved the constitution and other famous docs.  Charlotte was a little disappointed that the original white house had been burned and was a little tougher to visualize as a kid, but Kaleena and I really enjoyed that. 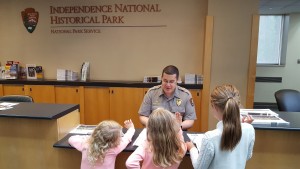 All of our g 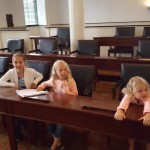 irls earned their junior ranger badges.  I think they have collected 5 or 6 now from National Monuments.  Definitely something I recommend.

Since we felt low on time, we did the big red bus tour.  We got to quickly see so many famous places in Philadelphia that we want to go back to.  We saw the zoo, the old prison, some of the highlights the monopoly board game was based on, and a little bit of everything.  So much knowledge crammed in to that hour and a half. 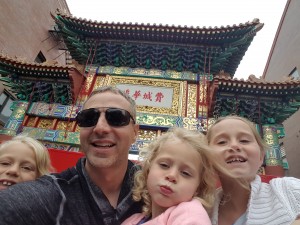 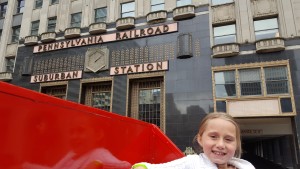 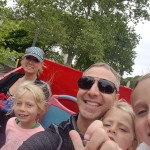 For dinner, we made it down the Geno’s and Pat’s for the ultimate taste test challenge of the Philly Cheese-steak.  I was surprised our kids ate so much since this really isn’t their type of food, but I think they were starving and in an adventurous mood..  Kaleena and the littles liked Pat’s, I was the only vote for Geno’s. 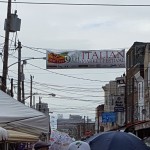 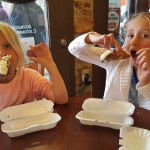 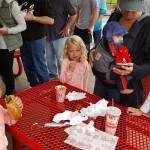 An awesome bonus, we were down there during their Italian festival.  My late Grandma Nonni’s birthday was that day, and she was a wonderful Italian woman.  We thought it was extra fitting to be down there on her birthday.  We all loved the authentic Canoli’s.

By Sunday we were supposed to fly out at 6 am, but our flight was cancelled… It’s always interesting to wake up at 3:30 start getting ready for a flight, then finding out you won’t be going anywhere until afternoon. 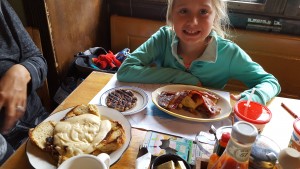 We made the best of it and looked for an authentic Philly breakfast.  I don’t know how Kaleena does it, but she finds some amazing spots.  We ended up at Honey’s Sit and Eat on 4th street.   http://honeyssitneat.com/  The food was unique, everything had a little honey in it and Philly style.  As much fun as breakfast, was walking through the neighborhood there.  Our family doesn’t see city life like that.  Narrow homes all attached and stacked on top of each other..  I was worried about our car getting broken into and nervous as we walked through the streets, luckily my wife is smarter than me and just enjoyed every moment of it.  By the end of our experience, we almost moved to Philly that day, and I won’t be surprised if we end up living there for a bit sometime in our life.

Our last stop was a quick stop by Betsy Ross’s house downtown before heading to the Airport.  Maddie had learned about that in school and was excited to share with her friends..

We can’t wait to get out there again.  So much we didn’t see.